Member
I'm writing my final for BA 460 at Eastern Oregon University, and I'm supposed to have a couple people review my entrepreneurship idea before I turn it in. I already know that grocery sales have low profit margins, so I don't mind sharing this with the world. I think that if I can get a kiosk to drive itself to a location and return using driver-less technology that a profit could be made by sending the market to 'food deserts'. I had to some Photoshop some images together to really get the idea across. Does any one have relevant experiences, or think this idea would succeed or fail? What do you think?
View attachment 1330 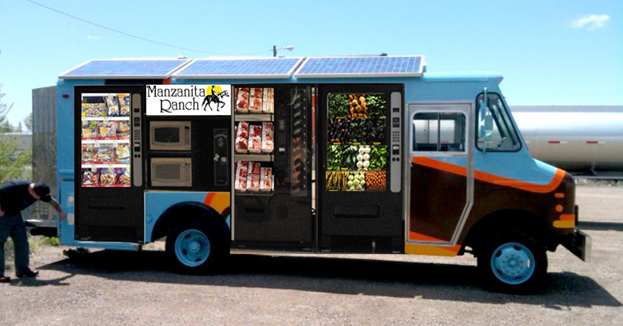 Administrator
In remote small towns, I think this could work.

As a boy, I lived in the mountains in northern British Columbia, where most of the population and civilization was in the south of the province.

I remember in one of those towns, there was a converted (and air conditioned) school bus that used to drive a route up and down streets with music or a bell or something to announce its presence, kind of like an ice cream truck. They sold groceries, mostly staples, from the bus and although I was only a child I remember it as being well attended. There was only one actual grocery store in town and it wasn't easy for many people to get there on a frequent basis. My mother used to send me out with money and a list when the guy came around. This was a significant convenience for her (she didn't drive and we only had one car anyway).

Member
Yeah. I was thinking this might work well in a remote place like Fort Rock, Oregon. The 163 people there seem to have to drive 30 miles to Christmas Valley, or 70 miles to Bend, OR to do their grocery shopping. An automated market could sell things which are not offered at the convenience store, 24 hours a day.

Moderator
Top Poster Of Month
@Matthew Miller , As the days ahead is more of resource oriented year. An automated kiosk grocery will be a very good idea especially this part of Asia is much ideal. Share more details of your idea .. i am sure few may like to take your technology.